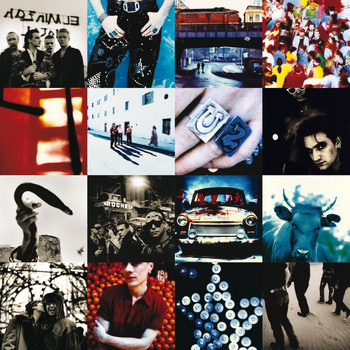 Achtung Baby is the seventh studio album by Irish pop band U2. It was released through Island Records on 18 November 1991.

It was probably the most dramatic New Sound Album in the band's career. Sensing a backlash building against the earnest, socially conscious roots music of the late 1980s—and, specifically, against their most recent release, Rattle and Hum—U2 decided to turn their attention away from cracking America to creating a record with more European appeal, sticking to personal subjects lyrically and musically incorporating industrial and electronic elements while keeping the sound accessible. The result allowed the band to eschew labels of pretentiousness, which made them more personable to audiences worldwide.

The album had an infamously Troubled Production in which the band came close to breaking up, due to the failure of 1988's Rattle and Hum and personal problems in the band such as The Edge's impending divorce. The band separated temporarily to pursue other interests before traveling to Berlin, where the reunification of the city inspired the band members to channel their frustrations through music. The writing of "One" saw a breakthrough, and all the ensuing recording sessions to follow were far more successful.

Achtung Baby won a Grammy Award for Best Rock Performance by a Duo or Group with Vocal, topped the Billboard 200 album chart in the United States, and hit #2 on the Official Charts Company album chart in the United Kingdom. It also topped the charts in Ireland and most other European markets. It was ultimately certified eight-times Platinum by the RIAA, and quadruple-Platinum by the BPI.

It was supported by five singles: "The Fly", "Mysterious Ways", "One", "Even Better Than the Real Thing", and "Who's Gonna Ride Your Wild Horses". All five were hits on the UK pop chart and the Billboard Hot 100.

An alternate version of the track "Until the End of the World" was featured in the 1991 Wim Wenders film of the same name, and is featured on the movie's soundtrack album (being the penultimate song on CD and cassette copies and the final song on LP ones).

In 2011, a remastered 20th anniversary edition of Achtung Baby was released. The outtake "Blow Your House Down" was released as a promotional single for the re-release. In addition, a charity album called AHK-toong BAY-bi Covered was released, featuring artists as diverse as Depeche Mode, The Killers, Snow Patrol, and Damien Rice performing covers of each of the songs. This shows the widespread influence Achtung Baby has had among many artists, both contemporary and new.

The 20th anniversary in 2011 produced some mega-deluxe editions, which excluding covers and remixes included the following B-sides and outtakes:

She tropes in mysterious ways: