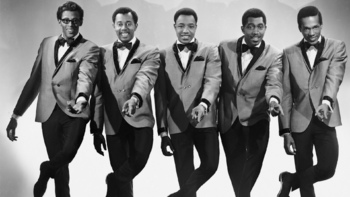 The Classic 5 (from left to right): David Ruffin, Melvin Franklin, Paul Williams, Otis Williams, Eddie Kendricks
I've got sunshine, on a cloudy day
When it's cold outside, I've got the month of May
Well I guess you'd say
What can make me feel this way?
My girl (my girl, my girl)
Talkin' 'bout my girl (My girl!)
— "My Girl", the Temptations' Signature Song.
Advertisement:

The Temptations are one of the most iconic R&B groups of all time, as well as Motown's premier male vocal group in the 1960s, known for their distinct harmonies, choreography, and flashy wardrobe.

The group was formed in 1960 as a merge of two vocal groups: The Primes (the male counterpart to the Primettes, later known as The Supremes), consisting of Eddie Kendricks and Paul Williams; and The Elgins, consisting of Otis Williams, Melvin Franklin, and Elbridge "Al" Bryant. Shortly thereafter, they were signed to Motown under the name "The Temptations".

Initially, they had several low charting singles before Al Bryant was fired for attacking Paul and replaced by invokedDavid Ruffin....

And soon after, they had their Breakthrough Hit with "The Way You Do The Things You Do". They quickly had a string of hits written and produced by Smokey Robinson and then Norman Whitfield including "Ain't Too Proud to Beg", "Get Ready", "(I Know) I'm Losing You", and especially "My Girl". During this time, they distinguished themselves from other R&B acts through slick choreography and the use of their trademark four-headed microphone stand, which gave each member an individual microphone for better audio quality while also providing enough space to dance.

All things seemed well on the surface, but problems began brewing behind the scenes. Ruffin started vying for a bigger push (including changing the name to "David Ruffin and The Temptations") and was plagued by drug use and erratic behavior, culminating in his firing in 1968 to be replaced by Dennis Edwards. Kendricks was also in conflict with Otis and Franklin over the direction of the band, as well as contractual issues, which resulted him leaving in 1971, with Paul leaving soon after due to health issues, dying in 1973 in an apparent suicide.

In the years following, they went through various lineup changes, including a brief reunion with Kendricks and Ruffin in 1982, with varying degrees of success. They remained legends nonetheless, getting inducted onto the Rock & Roll Hall of Fame in 1989, and receiving the Grammy Lifetime Achievement Award in 2010, and were the subject of a miniseries in 1998 and a biographical Jukebox Musical, Ain't Too Proud: The Life and Times of The Temptations, in 2018.

Sadly though, many of the members have died, and by the mid-1990s, only Otis was still living from the classic lineup; he and Melvin Franklin's estate now own the group's name.

My Tropes, Talkin' 'bout my tropes!: