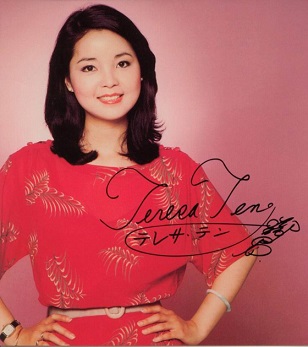 After breaking through in 1968 in a music program, she started to released records in the early 70's. From 1974 onwards, she began to break through the Japanese market with several albums sung in Japanese. In fact, she sang in her native Mandarin, in Cantonese, Japanese or English throughout her career.

Due to the countinuing tensions which started in the late 70's/early 80's between the PRC and Taiwan (and Hong Kong as well), she, along with other artists, was banned for several years due to the then usual excuse: "too bourgeois". Thanks to the black market, though, her popularity in mainland China never stopped (cassette tapes of her songs were filtered and copied into the homes of the citizens). In fact, the banning was lifted a bit later. She was also called "Little Deng" (see the Pinyin version of her name), because she shared her family name with Deng Xiaoping. It was said that Deng the Communist Leader ruled by day, but that Deng the singer ruled by night. Before Teng's music arrived, love song pop music was nonexistent in China.

In 1983, she released an album (Dandan youqing), which fused 12 poems from the Tang and Song dynasties with music both traditional and modern from the East and the West. She was the first singer to win the All-Japan Record Awards for four consecutive years (1984–1988).

Teng performed in Paris during the 1989 Tiananmen student protests on behalf of the students and proclaimed her support for democracy. On May 27, 1989, over 300,000 people attended the concert called "Democratic songs dedicated to China" (民主歌聲獻中華) at the Happy Valley Racecourse in Hong Kong.

Sadly, her hopes of performing in China never materialized. The PRC invited her somewhere in the mid-90's, but she passed away in 1995, at the age of 42, from a severe respiratory attack (she suffered from asthma throughout her life). She was given state honours at her funeral in Taiwan, with then president Lee Teng-hui and thousands of people attending.

The grave site features a statue of Teng and a large electronic piano keyboard set in the ground that can be played by visitors who step on the keys. The memorial is often visited by her fans — this represents a noteworthy departure from the traditional Chinese practice of shunning grave sites. That's how important she was and still is.