Music / The Seeds of Love 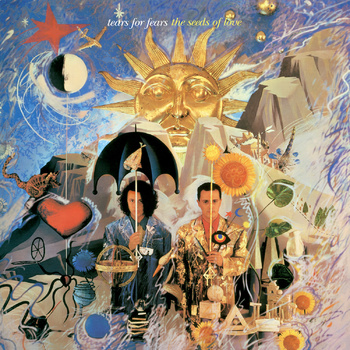 "We've got the whole wide world in our hands!"
Advertisement:

The Seeds of Love, released in 1989, is the third studio album by English progressive pop group Tears for Fears. Coming out nearly half a decade after the smash critical and commercial success of Songs from the Big Chair, the album dives even further into the eclectic experimentalism that the band had leaned into on their sophomore album, amplifying their jazz influences and incorporating elements of soul and Gospel Music. Additionally, the sound becomes much denser and more organic; public preferences had already shifted away from synthesizer-driven music by this point, and indeed the band openly desired to move away from the "programmed pop" of their prior work, which they came to view as sterile and restrictive.

This change in sound was not without consequence: because of the far greater complexity in both composition and instrumentation, the album took three years and over £1 million to put together, starting in late 1986 and continuing through the remainder of the decade. Much of this was exacerbated by the band's perfectionism, resulting in material being constantly scrapped and rearranged as producers came and went, with the artists ultimately settling on Songs from the Big Chair engineer David Bascombe. To help flesh out their black-inspired sound further, the band enlisted the help of African American lounge player Oleta Adams, at the time a relative unknown, to provide piano and backing vocals on several songs. The album would act as a major Colbert Bump for Adams, who was able to restart her dormant solo career and see renewed mainstream and critical attention off the heels of her collaboration with Tears for Fears.

Upon release, the album became a chart-topper in the UK and Ireland and peaked at No. 8 on the Billboard 200, going on to become the 21st best-selling album of the year in Britain and the 66th best-selling of 1990 in the United States. The album would later be certified double-platinum in Canada, platinum in the UK, the US, and France, and gold in Australia, Brazil, Hong Kong, the Netherlands, Spain, and Switzerland.

The album's difficult production would have an adverse effect on the band: Curt Smith, feeling that Roland Orzabal had become too controlling during production and with diminishing results, walked out on Tears for Fears in 1991. The pair's relationship would become heavily strained for the remainder of the decade, with the two not reconciling and reuniting until 2000. During the interim, Orzabal would keep Tears for Fears going himself, with the band's '90s material often being described as his solo work in all but name (although the band's material was still written collaboratively between Orzabal and the other remaining members).

The Seeds of Love was supported by four singles: "Sowing the Seeds of Love", "Woman in Chains", "Advice for the Young at Heart", and "Famous Last Words". Additionally, two B-sides would be rearranged and released as singles following the album's release. The first of these was a remix of "Johnny Panic and the Bible of Dreams", pseudonymously released as a non-album single in 1991. The second was "Laid So Low (Tears Roll Down)", a re-recorded lyrical version of the (mostly) instrumental "Tears Roll Down"; released in 1992 to promote the Greatest Hits Album Tears Roll Down (Greatest Hits 82–92), this single would mark the first release by the Smith-less incarnation of the band.

Tropes for the saints who are quick to judge me: