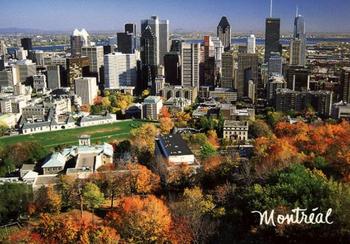 Montreal is Canada's second-largest city. It is also the second-largest French-speaking city in the world (after, of course, Paris).note A few argue that Kinshasa and Abidjan come between Paris and Montreal, but those cities being in Africa, the locals only speak French as a lingua franca for administration, education, and sometimes trade, while various indigenous languages are spoken at home. In Montreal, French is unquestionably dominant, although English has a secondary role in government, business, and education. Its most (in)famous structure, Olympic Stadium, was home to the Expos baseball team until they became the Washington Nationals. The Bell Centre (formerly the Molson Centre) is the home of the Montreal Canadiens (who previously called the storied Montreal Forum home), the oldest hockey team in the NHL and the team that has won the most Stanley Cups (24 in all, one of which predates the NHL — though they haven't been doing so well in the last two decades). While not as big a filming centre as Vancouver, quite a few movies are still filmed in Montreal. Its wide range of architecture allows the city to act as a cheap stand-in for many European cities. Montreal is also the home of a few Video Game design studios: Ubisoft Montreal (Prince of Persia series and Assassin's Creed); Electronic Arts Montreal (Army of Two); Eidos Montreal (Deus Ex: Human Revolution) and the late THQ Montreal. The annual Just for Laughs Comedy Festival is the largest comedy festival in the world.

The city is located on an island in the Saint Lawrence River in the southwestern corner of the province, home to nearly 2 million people, with another 2 million living in the surrounding greater Montreal area on the mainland and the neighboring island of Laval. The island is connected to the mainland by a network of bridges, many of which, most notably the high-traffic Champlain Bridge, suffer from the city's notoriously poor road and infrastructure conditions, a target of a major corruption inquiry in recent years. Potholes are practically a feature rather than a bug on many of the roads, especially in the springtime.

Montreal is not an unequivocally French city despite the province's strong laws protecting its French heritage (which most obviously manifests itself in the rules regarding public signage in which the French words must be printed in bigger letters and more prominently than the English translation—sometimes people like to give an extra twist of the knife by printing the English in harder to read grayscale italics). Especially in the downtown area around Ste. Catherine Street even more so when approaching the largely English suburb of Westmountnote an independent town entirely surrounded by Montreal, quite a few of its inhabitants are native English-speakers (often Jewish), who often adopt a culture closer to American/Anglo-Canadian culture than their francophone compatriots. There are several enclaves of English speakers within the city: the predominantly Hasidic neighbourhood Outremont, the largely Jamaican and Iranian Notre-Dame-de-Grâce (NDG), and parts of St. Henri. The communities of the suburban "West Island", though not part of Montreal politicallynote although they were amalgamated with the city briefly in the early 2000s, are also heavily English-speaking, especially Côte-Saint-Luc and Montreal-West). The city also plays host to two predominantly English universities (McGill and Concordia) as well as two French ones (Université de Montreal and UQAM). On top of all this, the city attracts quite a few immigrants; overall, it's a cultural mosaic similar to other major North American cities.

The busiest area is the downtown core; there's bars and restaurants everywhere and a strip club every other block on Ste. Catherine (we're quite serious: Ste. Catherine goes bar, restaurant, bar, strip club, interesting shops (that kind and not), museum, bar, strip club, etc.). The popular definition of "downtown" is from St Denis to Atwater, along Ste. Catherine's up to Sherbrooke. Also, the Montreal Gayborhood is centered on Ste. Catherine just east of downtown. Generally a good deal. Other popular neighbourhoods for tourists include Old Montreal, south of Ste. Catherine by the river and full of churches, old buildings, and other eyecatching landmarks; the Mile End, made famous by being the stomping ground of Leonard Cohen and home to St. Viateur's famous bagels (get 'em while they're hot—if you order anything other than a sesame seed one it'll be cold); and occasionally the Plateau, home to the oft-maligned "McGill Ghetto" as well as most of the more famous landmarks on St Laurent, for instance Schwartz' Deli.

Parking is annoying and public transit much less so, so it may be a good choice to park your car close to an outlying metro station, get a day pass, and take transit in. Also, whatever you do, do not wear a Boston Bruins shirt. It will end very badly; "LES TABARNAK DE BRUINS!" is practically the city's motto.

One unique aspect of the local media market is that, while most other large Canadian cities receive the major US broadcast networks through affiliates based in cities at least as large as they are (much of southern Ontario gets the Buffalo or Detroit stations, Vancouver gets the Seattle ones, etc.), the closest American cities to Montreal are Burlington, Vermont and Plattsburgh, New York, whose combined metropolitan areas (city and suburbs together) are less than one-twelfth the population of the Montreal area. Consequently, stations in this media market have the largest city in their broadcast areas in another country. It leads to the strange situation where American TV stations carry large amounts of advertising for foreign businesses — a good percentage of English-language advertising for Montreal businesses aimed at Montrealers is carried on Burlington and Plattsburgh stations, and ads in French are not unheard of (although satellite services' carrying the main East Coast feeds out of New York City has put a dent in this in recent years).

Close proximity to Quebec has another interesting effect on Vermont and far northern New York. As they sit right next to a French-speaking area that has far more people than they do (and which sends a lot of tourists their waynote There are also quite a bit of Americans going up to Quebec, as the legal drinking age there is 18), it is one of the few regions of the country where French, not Spanish, is the default second language. Road signage on parts of the Adirondack Northway is in English and French while I-89 in Vermont has signs with distances in kilometers, the tourist guides at Fort Ticonderoga (or Fort Carillon, the French name for it) are printed in both languages, and it's not uncommon to hear people on the street speaking in French. Montreal is also the northern terminus of the Amtrak Adirondack service from New York City's Penn Station (one of three Canadian termini of Amtrak services, and the only francophone one).

Montreal is known for its epic music scene. Having been hailed as the most creative city in North America in the early 2000s, it has produced such bands as Arcade Fire, Malajube, Young Galaxy (recent Polaris prize shortlisters), Stars, Coeur de Pirate, Wolf Parade, The Stills, Grimes, Ought, and The Dears. As well it was/is home to music royalty Leonard Cohen and Rufus Wainwright, among others. The yearly Montreal Jazz Festival is a huge event that draws in dozens of the biggest names in the genre. Surprisingly, there is also a very big Technical Death Metal following; numerous big names in the genre (Cryptopsy, Neuraxis, Martyr, Augury, Beyond Creation, Quo Vadis, etc.) hail from either the city proper or surrounding locales, and touring acts in the genre are likely to experience sold-out crowds at Les Foufounes Electriques (The Electric Booties, literally), the city's longstanding go-to venue for underground touring acts.

Did, we, MENtion, that it's ..... ALso, William Shatner's, BIRTHPLACE?note Shatner is an Anglophone Conservative Jewish Montrealer of Hungarian descent.