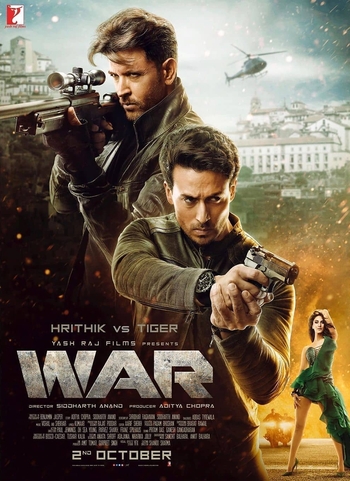 War is an Indian Hindi-language action thriller from 2019. The film was directed by Siddharth Anand and produced by Aditya Chopra from Yash Raj Films. It stars Hrithik Roshan and Tiger Shroff. The score was composed by Vishal–Shekhar, with lyrics written by Kumaar.

War depicts the story of an Indian soldier who is sent to eliminate his former mentor who has gone rogue.

The filming began in 2018 and concluded in March 2019. The movie was originally called Fighters, but the film's title was changed after the release of the teaser trailer to War.

War was theatrically released in India in 4DX in October 2019. It broke the record for the highest-opening day collection for a Bollywood film in India.

. The movies Ek Tha Tiger, Tiger Zinda Hai and Pathaan are all set in the same continuity as this one.

Not related to the movie War (2007) starring Jet Li and Jason Statham.