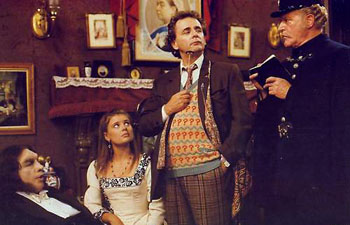 To make a long story as short as humanly possible, the Doctor takes companion Ace back in time to Victorian Britain for some form of training that involves facing her childhood fears. The TARDIS lands in a mansion of the era, and the Doctor and Ace soon find themselves the guests of a "Josiah Smith" who proudly proclaims the wonders of the Darwinian concept of evolution. Ace, who has a trauma involving haunted mansions, tells the Doctor that she doesn't appreciate his lesson. Also, there is a Rev. Ernest Matthews, who despises evolution, there's a maid service that refuses to stay in the house after 6pm... and a polite, well-dressed Neanderthal butler named Nimrod. The maid service is apparently also taking care of Great White Hunter named Redvers Fenn-Cooper, who has recently lost his mind by "seeing something he cannot comprehend". And there's a sinister housekeeper, and Josiah's niece who isn't entirely uncreepy herself. Ace decides to crossdress for the occasion (mainly because her modern clothes including Vapor Wear cause people to call her a shameless trollop).

Still with us? As the story unfolds at a breakneck pace, it's soon revealed that the disturbingly creepy house might be haunted. Only it's not. It's the base for an alien surveillance force full of animated alien insectoid husks, the leader of which (Josiah himself) wishes to integrate themselves with the human race. In his opinion, that's best done by having Fenn-Cooper assassinate Queen Victoria and taking over England as its new King, as that's how evolution works in his mind.

The Doctor and Ace soon stumble across the fact that Josiah is not the leader of the expedition — that's another being, who's being held prisoner within his own ship, which is currently beneath the mansion. This being is, best put, an Angel (not a weeping one, thankfully) going by the name of "Light". Light is dismayed to find himself back on Earth, particularly at the fact that everything has changed. He was just done cataloguing the whole thing when evolution just had to go and render all his work invalid. Then the Doctor talks to exotic bugs for a bit and wakes up a policeman who was locked in a drawer in suspended animation. As other plot threads, which include a commentary on evolution itself, as well as a lovely side-discussion of Java, resolve themselves very rapidly, Light essentially suffers from a blue screen of death as he comes to the realization that change sucks. His answer to all this change? Utterly eliminate all life on Earth using actual primordial soup. They all discuss this over a nice dinner party while Ace, caught up in yet another plot thread, teaches an alien named Control how to be a lady.

The story finally comes down to the Doctor and Light having a verbal sparring match, which culminates in the Doctor pointing out the inevitability of change for all things and finally talking Light into ending his own life so that he will no longer change. The space ship beneath the mansion decides to recruit a new crew, and enlists Control, who was formerly locked within the ship with fellow prisoners Light, Fenn-Cooper and Nimrod. Ship and crew then depart for places unknown while the Doctor talks to Ace about any regrets she may have in her life.

As it turns out, Ace encountered this place in her youth (in the future, with respect to the story's Victorian setting) and the evil feeling left behind from Josiah and Light pushed Ace into burning down the mansion. This resulted in a trauma as well as some time spent with meddling guidance counselors. Ace's only regret after all this? That she didn't blow it up instead.

If you didn't follow any of that, don't worry; we didn't either. The script was already considered too long for the traditional four part story and was then compressed to three parts for budgetary reasons. As a result, the story ended up garbled beyond any semblance of coherence, and now maintains a reputation as one of the most impenetrable stories in the show's history.

The original pitch was set in a sinister house from the Doctor's childhood, on Gallifrey, but showrunner John Nathan-Turner asked for that aspect of it to be changed, as he felt it gave away too much about the Doctor at once. Marc Platt went on to actually write that story as the notoriously confusing Doctor Who New Adventures Grand Finale Lungbarrow. "Ghost Light" ended up being the final production of the original series, as it was produced after "The Curse of Fenric" and "Survival", despite airing before both of them; they got priority in the production scheduling because they required extensive location filming, whereas "Ghost Light" was entirely studio-bound. note The final scene shot was of Light turning Gwendoline and her mother to stone, in case you're curious.

The DVD release contained a 45-minute documentary, a 30-minute interview with Marc Platt and audio commentary that filled in the gaps in what was missing and not entirely clear. Prior to that, a 1993 scriptbook contained an article by Platt explaining the serial's backstory.