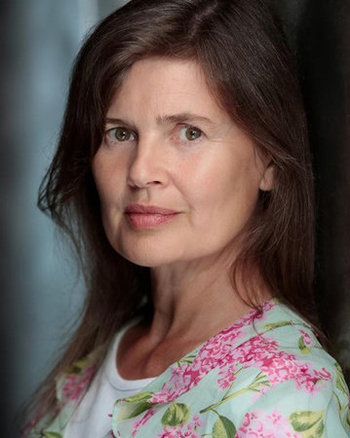 "I think my Dalek got what it deserved, actually..."
— Sophie Aldred, extemporizing on the subject of "My Dalek", at Gallifrey One 2008
Advertisement:

Sophie Aldred (born 20 August 1962 in Greenwich, London) is an English actress who played Action Girl Ace on Doctor Who. She beat a Dalek with a baseball bat in "Remembrance of the Daleks". Since the end of her tenure as a companion, she has remained a member of the Who community, editing fan magazines and providing voices for Big Finish audio plays. A 2019 trailer

for a box set of Season 26 (in which she featured) showed Aldred playing a much older and wiser Ace reminiscing about her time with The Doctor and teased at a possible return for the character in the current iteration of the show.

She has appeared on several TV shows, such as Blue Peter, EastEnders, Bob the Builder, Dennis the Menace (UK), Corners, and Its A Mystery, and is currently starring alongside fellow Who-alum David Tennant in Tree Fu Tom. She married fellow actor and TV presenter Vince Henderson in 1997, and they have two sons.

The Blue Peter badges that she wore as Ace are her own, by the way - the first being received for a design for a rocket launcher!