"I Am Becoming" Song 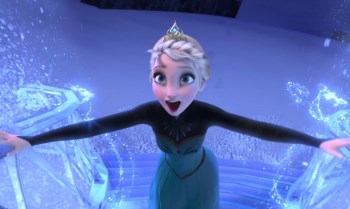 Related to an "I Am" Song, this isn't about what the singer is, but what he or she is becoming. This can be expressed positively or negatively.

May double as a "I Want" Song, a Sanity Slippage Song, a BSoD Song, a "Gaining Confidence" Song, or a Villain Song, especially if That Man Is Dead. See also Coming-of-Age Story, Character Development. Compositionally, it's often a Small Start, Big Finish number, starting off rather slow and low before growing as the character asserts themselves.

This is meant to describe Character Development, and not a literal transformation or Metamorphosis, though the two may overlap if the metamorphosis causes the character's development. Don't let the progressive tense fool you either; it can also be an a character explaining how s/he's already changed—and might only just be realizing it now.

Note: This is Character Development summary in song: spoilers may ensue, even if you only see a character name.

Coloratura expresses her true image and how she learned to see who she is.

Coloratura expresses her true image and how she learned to see who she is.