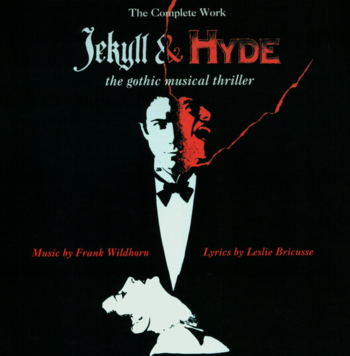 Man is not one, but two;
He is evil and good.
And he walks the fine line
We'd all cross if we could!
And he's waiting...right behind the facade.
Advertisement:

The musical stage adaptation of The Strange Case of Dr. Jekyll and Mr. Hyde, written by Broadway veterans Frank Wildhorn and Leslie Bricusse.

Dr. Henry Jekyll plans to change the world by finding a way to separate the good and evil parts of the human psyche, balancing that with his engagement to Miss Carew and prostitute Lucy Harris's attraction to him. When his experimental proposal is rejected by London's elite, Jekyll uses himself as the test subject and unleashes his darker half, Mr. Edward Hyde, upon the world—putting those he loves, those he hates, and Jekyll himself in mortal danger. While Jekyll, like every man, has good and evil inside him, Hyde alone is only evil...

The show is notable for its lengthy production history and the amount of changes made to the songs, characters, and story over time, with a whopping six concept albums released over varying stages of productions and revivals. Most stage productions combine elements and songs from various releases.