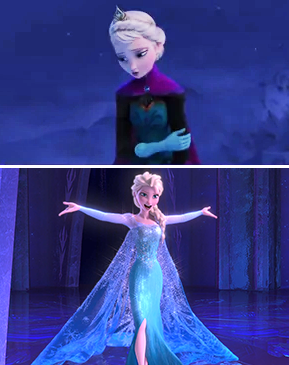 From "terrified and alone" to "confident and in-control", all in the course of a 3-minute song!
When the sharpest words wanna cut me down
I'm gonna send the flood, gonna drown 'em out
I am brave, I am bruised
I am who I'm meant to be
This is me!
— Lettie Lutz, "This is Me," The Greatest Showman
Advertisement:

Who doesn't love a good musical? While the songs are always fun, they usually also push the story forward in some way. One way they can do this is by revealing the emotional state of the singer- maybe they're angsting about their ex or declaring their dreams, or any other number of possibilities. The audience gets to learn about their feelings and beliefs with a catchy musical number.

Sometimes a character won't be feeling very confident about themselves. They're having a rough go of it — insecurities abound. This may be the result of a failure or struggle that leads the character near the Despair Event Horizon, but it could also just be the character suffering from low-confidence or Stage Fright. When they sing, be it diegetic or non-diegetic, they'll start out being nervous about it. If they're performing in front of others, it's especially stressful, as they're being judged for skills they may not be very confident in. Even if it's just them singing alone, their nerves will get the better of them. The song starts out slowly and often stiffly, with the character not moving around much or putting much energy into it.

And then, something happens. Over the course of the song, the singer will start to enjoy it. Maybe it's symbolic of them breaking out of their shell and realizing their strengths. Or, maybe they're just loosening up with an encouraging crowd to energize them. Either way, the song picks up speed and power. The character begins to dance, passionately performing and having a good time. They'll start to please the audience, if they have one, or they'll just please themselves.

The intent here is to show the character slowly triumph over their insecurities, told through music. It may not be a permanent change, although it can be — the point is that the character starts to gain confidence and loosens up, symbolized by them starting to enjoy themselves, rather than be held back by the issues plaguing them, even if only temporarily.

Sometimes overlaps with "I Am Becoming" Song and "I Am Great!" Song, and can occur during a Karaoke Bonding Scene. Compare and Contrast Pep-Talk Song, in which other characters sing to make the sad character feel better, and Small Start, Big Finish, which has a similar build-up but without the emotional metaphor.