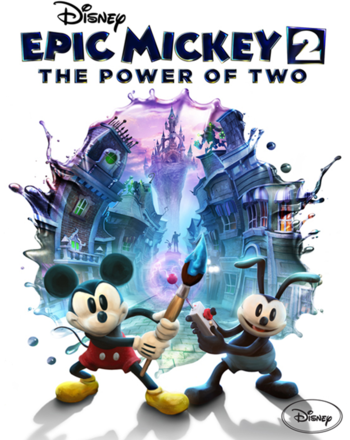 Oswald - from foe to friend.
"As the forgotten Toons rebuilt their home, trouble lurked just around the corner..."
— Yen Sid, from the game's opening cutscene
Advertisement:

Epic Mickey 2: The Power of Two is a multi-platform sequel to the Wii exclusive Warren Spector title Epic Mickey from Disney Interactive Studios. It was released on November 18th 2012. The PC version was initially cancelled, then released in specific parts of Eastern Europe in October of 2013, then became available worldwide as part of Disney's Steam pack in October 2014. It features co-op play, with a second player controlling Oswald, who flies like a helicopter and attacks with electricity. The game is also a musical. Marv Wolfman (Teen Titans) co-wrote the script.

After the thinner has receded from Wasteland, quakes have been causing trouble throughout the realm, while the Mad Doctor claims he has changed his ways and is offering the help of his machines and Beetleworx. Oswald's willing to give him the benefit of the doubt, but he and the other inhabitants decide to call in for Mickey's help. Mickey and Oswald must work together to fix Wasteland's problems, find the source of the Earthquakes, and journey into the Dahl Engineering Corridors at the foundations of Wasteland and investigate the Mad Doctor's true intentions along the way.

There is also a companion game for the Nintendo 3DS called Epic Mickey: Power of Illusion. It was developed by DreamRift, the folks behind Henry Hatsworth and Monster Tale. Officially a followup to the Castle of Illusion series as well, the story has Mizrabel and the castle itself trapped in Wasteland. Seeking a way out, she tries draining the paint and cartoon essence out of famous toon residents of Mickey's world. Mickey must save his fellow toons and confront Mizrabel, repairing the damage with paint along the way.