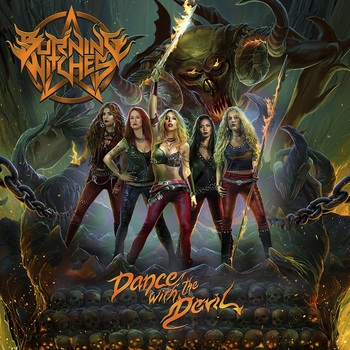 "Whatever you will try, there is nothing you can do. You can't escape the sisters of fate!"
"Burning Witches" is a Swiss Thrash Metal band, and as the name suggests their lyrics are usually about witchcraft. They released their first self-titled album in 2017, and soon signed by Nuclear Blast. The first vocalist left the band after two albums, and Laura Guldemond replace her from "Dance with the Devil" onwards.
Advertisement:

Not to be confused with "Burning Witch" (in singular), a Doom Metal band from Seattle. For the trope, see Burn the Witch!.