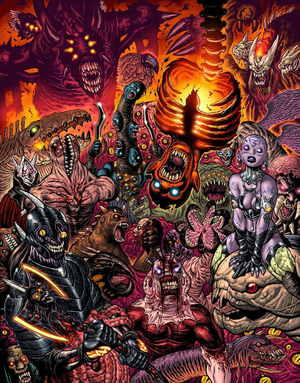 There's no place like home, even for those of supernatural origin. And for some, their home is quite different from ours. It could be anything from a dark forest, to hidden caves, or maybe even an entirely different plane of existence. The one thing they have in common is their significance of being the place where these fantastic beings were born and raised.

Places like this usually tend to be a Fantasy Kitchen Sink. The location itself is frequently a Deserted Island, Void Between the Worlds, and/or an Eldritch Location. Not to mention there's always the chance that the place itself is another monster. May tie into Villainous Badland, Heroic Arcadia.