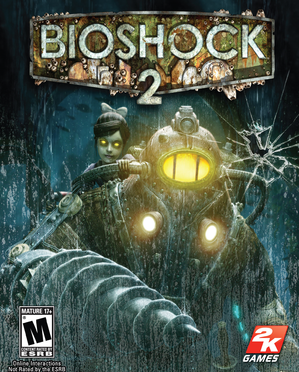 They have your Little Sister. You have a drill. Get to it.
"For every choice, there is an echo, with each act we change the world. One man chose a city free of law and god, but others chose corruption, and so the city fell. If the world was reborn in your image, would it be paradise or perdition?"
— Sofia Lamb

Eight years after the events of BioShock, the leaderless Rapture has fallen under the control of Dr. Sofia Lamb, a collectivist foil to Andrew Ryan. You are "Subject Delta", a Super Prototype Big Daddy who finds itself forcibly separated from Eleanor, the Little Sister to whom you were bonded. Waking up in a Vita-Chamber, you embark on a journey through the undead corpse of Rapture to reunite with Eleanor and save her from the fate Sofia Lamb has planned for her.

BioShock 2 was released in February 2010 by 2K Marin (instead of Irrational Games), accompanied by another viral marketing campaign

. It includes a multiplayer section, where players take control of Splicers during the war and compete in games like Deathmatch and Capture the Flag. Winning these games rewards the player with ADAM which is used to buy new weapons and plasmids. Players also got an apartment, where they can change the appearance of their Splicer.

In August 2010, 2K released two DLCs for BioShock 2: The Protector Trials and Minerva's Den. In The Protector Trials Tenenbaum activates another Alpha Series Big Daddy and asks him to save several Little Sisters from Sofia Lamb. Minerva's Den follows another prototype Big Daddy "Subject Sigma", who is tasked with obtaining a copy of Rapture's computer mainframe, called The Thinker, by one of its creators Charles Milton Porter. The latter is an actual story, while the former was a series of challenges with limitations, like using only certain weapons or plasmids. On September of 2016, this game alongside the first BioShock, BioShock Infinite, and their respective downloadable contents were given remastered re-releases with BioShock: The Collection for Xbox One, PlayStation 4, and Microsoft Windows, featuring updated 1080p 60 FPS presentation on all platforms, however the remastered version of BioShock 2 does not have its multiplayer components. 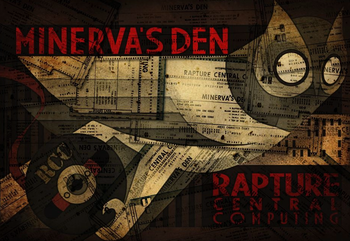