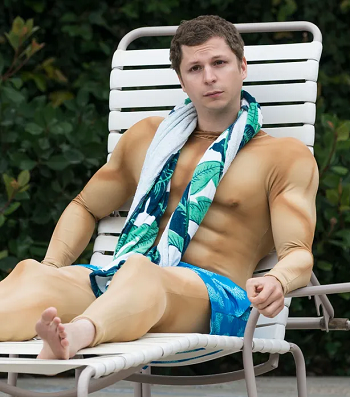 "With Anchor Arms! They slip on like a glove. Just add air. How big do you want 'em? Normal? Veiny? And for the ladies... hairy. I was a wimp before Anchor Arms. Now, I'm a jerk and everybody loves me. So order now, wimp!"
— TV Shark, SpongeBob SquarePants
Advertisement:

Many people would love to have a muscular physique to show off, whether it be to impress peers, intimidate enemies, or attract amorous attention. However, some of these are too impatient or lazy to put in the necessary training, and want to take a shortcut. Others may not want to grow their muscles permanently, because they only need it as a temporary costume or disguise. In either case the solution is to get fake muscles for show, usually by stuffing a large amount of padding inside one's shirt, wearing a muscle suit, or even painting muscles on. While they might be able to pull off a Pec Flex, they should be careful not to attempt any task that actually requires great strength.