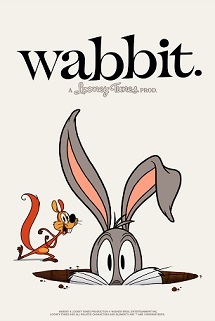 Goin' down the rabbit hole
Where we're goin' no one knows
Obstacles 'round every bend!
Let's see where the tunnel ends!
Advertisement:

The show features a Sketch Comedy format of various segmented shorts, this time adding brand-new looney friends and enemies to the established ones, such as Bigfoot and Squeaks the Squirrel. Some of the established Tunes are altered in some way, such as Wile E. Coyote, who adopted his arrogant "super genius" persona (from cartoons such as Operation: Rabbit and Rabbit's Feat where he spoke).

Even though it was slated for a premiere on Boomerang on October 5, 2015, it aired on Cartoon Network first as a sneak preview starting September 21, 2015. Ironically, Wabbit was originally considered for Cartoon Network.

As for its name (which should not be confused with the original cartoons with either the same word or just "rabbit" in the title, such as Duck! Rabbit! Duck!), it came from Elmer Fudd's famous title for Bugs' species under his speech impediment. Ironically, Elmer did not appear when the series first aired but, over the course of the show's first 52-episode season he note as seen in this clip.

and other classic Looney Tunes characters started popping up. As a result, the series was retooled in its second season as New Looney Tunes, now featuring segments starring the other lovable characters.

In January 2018, producer Matt Craig announced on Facebook that the show would not be renewed for a fourth season due to them having already produced so many unaired episodes due to the launch of the Boomerang app and the immediate success of the show on Boomerang's international channels. Instead, Warner Bros. Animation announced production of an upcoming creator and cartoonist-driven revival simply titled Looney Tunes Cartoons.

Wabbit (later renamed New Looney Tunes) had three different versions of the same theme in Season One alone. Though the lyrics are the same, the music ranges in different genres like jazz and country.

Example of:
Rearrange the Song

Wabbit (later renamed New Looney Tunes) had three different versions of the same theme in Season One alone. Though the lyrics are the same, the music ranges in different genres like jazz and country.