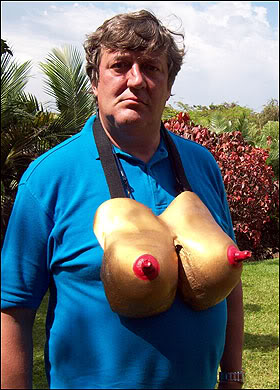 These could well be fake.
"The doctors say it dates back to a film where I had these huge prosthetic breasts because my character was breast-feeding. The weight of them, and of the baby, did my back in."
— Anna Friel
Advertisement:

Some women are concerned with their cup sizes, so they try to increase them with padding or surgery. Usually used as a way to demonstrate A-Cup Angst, and as a method for Breast Expansion. Very commonly Played for Laughs.

For someone who's a Cross Dresser or Disguised in Drag, simply using two appropriately-sized balls will suffice.

Sometimes when two girls disguise themselves as a tall woman in a trench coat, the folded-up legs of the top girl will be the bust.