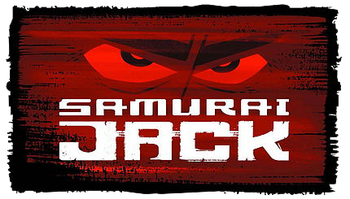 Gotta get back, back to the past, Samurai Jack!
"Long ago, in a distant land, I, Aku, the shapeshifting Master of Darkness, unleashed an unspeakable evil! But a foolish samurai warrior wielding a magic sword stepped forth to oppose me. Before the final blow was struck, I tore open a portal in time and flung him into the future, where my evil is law! Now, the fool seeks to return to the past, and undo the future that is Aku..."
—Aku's Opening Narration

Our story begins long ago, as the young prince of Japan witnesses the shapeshifting demon Aku emerge into the world and lay waste to his home. With the help of his mother, the boy escapes and spends his life training rigorously with warriors from around the world. Once he comes of age, he returns to his homeland as a full-fledged samurai warrior to defeat Aku, armed with the only weapon that can harm the demon - a magic sword passed down to him by his father. But, as the opening monologue states, Aku flings him into the distant future, where Aku has conquered the entire world and beyond.

Inspired by some jive-talking locals, the displaced samurai adopts the alias of "Jack" and travels the world once more, this time searching for a way back to his own time so he can defeat Aku for good and prevent this future from ever happening. Unfortunately, while Jack has the means to defeat Aku in more or less any one-on-one fight, the world has changed radically under its new overlord, becoming overrun with criminals, refugees, and hostile wildlife from across the universe. Thus, Jack has too many enemies to fight directly, and too many helpless victims to aid while still searching for a way home.

Samurai Jack has been held in high regard for its outline-free art style, impressive action sequences, and long stretches of animation without any of the characters speaking. The show took numerous stylistic risks: it lacks the Thick-Line Animation typical of its contemporaries, most episodes had minimal dialogue, mature themes were often addressed for the sake of drama or laughs, and drastic art shifts were used to mark dreams, hauntings, and visits to alternate dimensions. Tellingly, it was Cartoon Network's first original program not to be a part of the Cartoon Cartoons brand, presumably so as not to have viewers think that it was just another "funny" cartoon show.

Cartoon Network ended the show after four seasons and fifty-two episodes, with Jack still trying to find his way back to the past. However, Toonami aired reruns during the block's third, fourth and final CN-era incarnations (it was also the final show to air on the final broadcast of their Toonami), and [adult swim]'s version of the block starting in February 2014. A DVD re-release of the series began in the same year. IDW later had a 20 issue Comic-Book Adaptation that ran from October 2013 to May 2015, with a last issue that had its own Bolivian Army Ending / Distant Finale to the series.note (Jack and Aku also appeared in the IDW Crisis Crossover comic book event Cartoon Network Super Secret Crisis War, released in June 2014.)

A Grand Finale feature film was in Development Hell in the decade following the show's cancelation before [adult swim] agreed to instead conclude the series with a ten-episode revival, with Tartakovsky and much of the main creative staff returning, in 2015. Set 50 years after Jack was flung into the future, this season officially brings Jack's tale to an end, while also deconstructing some of the Darker and Edgier aspects of his never-ending journey. The final season aired between March 11th, 2017 and May 20th, 2017. And for bonus, Samurai Jack: The Complete Series was finally released on Blu-ray and Digital HD on October 17, 2017, complete with remastered versions of the first four seasons of the series!

Shortly after the fifth season ended its run, IDW published a five-issue miniseries titled Samurai Jack: Quantum Jack, which is an Alternate Continuity from the original cartoon and IDW's previous comic adaptation. On August 21, 2020, a Hack and Slash video game titled Samurai Jack: Battle Through Time was released, which is considered a canonical Interquel for the series.

This show has its own Best Episode Crowner

Gotta get back, back to the tropes, Samurai Jack:

The High Priestess, normally a Hate Sink, seems to show some of kindness and love to Ashi and gives the girl a heartwarming speech about the beauty of the world... then she tosses her daughter to a Giant Mook to have her beaten senseless for losing focus.

Example of:
Bait the Dog

The High Priestess, normally a Hate Sink, seems to show some of kindness and love to Ashi and gives the girl a heartwarming speech about the beauty of the world... then she tosses her daughter to a Giant Mook to have her beaten senseless for losing focus.