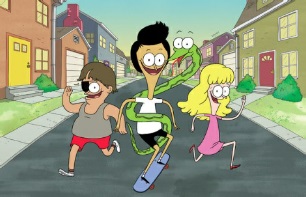 Okay, so here's the pitch. It's the adventures of a kid and his talking pet snake. Not good enough for you? Well, how about we bring in the creators of the surreal cult 90s sitcom The Adventures of Pete & Pete and the man behind a nightmare fuel-filled dark comedy called The Marvelous Misadventures of Flapjack as key producers? Oh good, we have your attention.

Created by Jim Dirschberger, Andreas Trolf, and Jay Howell — the latter of which designed the characters for Bob's Burgers — Sanjay and Craig is a Nicktoon about a 12-year-old boy named Sanjay Patel (Maulik Pancholy) and his talking pet snake named Craig Slithers (Chris Hardwick), and the trouble they get into in the suburban town of Lundgren (founded by Dolph Lundgren himself). Other notable characters include Sanjay’s parents, Vijay (Kunal Nayyar) and Darlene (the former owns a clearance store and the latter works at the hospital), Megan Sparkles, an overachieving girl who has a crush on Sanjay, Belle Pepper, a teenage waitress at The Frycade, Hector Flanagan, a goofy friend of Sanjay who wears an eyepatch, Remmington Tufflips, a washed-up actor the duo admire, Craig’s brother, Ronnie, and Sam Lastnamè, a girl introduced in Season 2.

Ran for three seasons from May 25, 2013 to July 29, 2016, after which Chris Hardwick confirmed on Twitter that the show had ended.