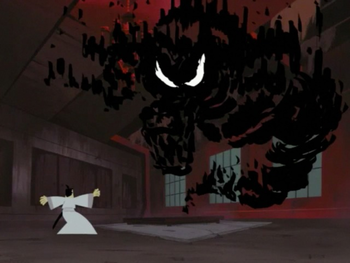 Nothing Is Scarier indeed.
Advertisement:

If you can watch the whole series without a little tension or terror, then you are just as brave as Jack himself. Some episodes were entirely built around Nightmare Fuel; even the episodes not revolving around horror have scenes that are traumatic, especially if you saw the series as a kid.

The frequent robot carnage that the censors let pass in every episode occasionally goes way beyond the borders of "not too bad"; once you reach dismembered robots impaled on spikes, things have gotten bad.

Nightmare Fuel subpages, being Moments subpages, are Spoilers Off pages. You Have Been Warned.

Jack and the Lava Monster

Jack vs. Demongo, the Soul Collector

Jack and the Spartans

Jack and the Zombies

Jack and the Traveling Creatures

Jack and the Creature

Jack and the Haunted House

The Birth of Evil

The Princess and the Bounty Hunters

Jack and the Baby

Season 5 raises the horror to new levels; now that the show has moved to Adult Swim, it gets to have a little more freedom with its violence, leading to some very dark and disturbing scenes that provide new waves of terror even veteran fans of the series weren't prepared for.