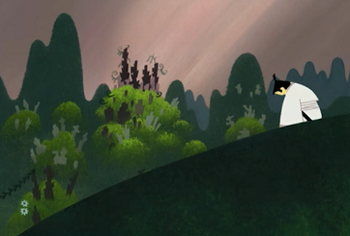 For all its action and adventure, comedy, happy moments, and even horror, there are also the moments that will make us weep for both our titular hero and other victims of Aku. Yes, that includes you big boys out there. As bad as the past four seasons were, Season 5 really cranked this up.

open/close all folders
In General
Season 1
The Beginning

Jack, the Woolies, and the Chritchellites

Jack and the Warrior Woman

Jack and the Lava Monster

Jack Remembers the Past

Jack and the Monks

Jack and the Spartans

Season 3
Jack and the Zombies

Jack and the Travelling Creatures

Jack and the Creature

Jack and the Haunted House

The Birth of Evil, Part 1

The Birth of Evil, Part 2

The Princess and the Bounty Hunters

The Four Seasons of Death

Jack and the Baby