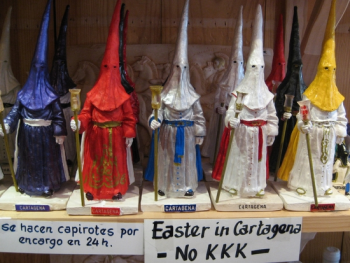 Might not be sold in the 'hood.
You may have noticed that one of the Yo Gabba monsters is a flexible salami-like creature with one gaping eye at the top. I'm pretty sure I sketched the original design for that in the margin of a chemistry textbook back in 1985.
— Charlie Brooker, You Have Been Watching
Advertisement:

Let's face it, some characters look odd. Something about their design makes them look ugly, or freaky, or... phallic. Or worse yet, maybe they resemble Blackface or the Ku Klux Klan.

The design is obviously unintentional (or at least probably not intended by the majority of the creators), and not meant as a Parental Bonus or Getting Crap Past the Radar. The offending part is pretty obvious. And it is so distracting that it can never be unseen.

See also: Fashion-Victim Villain (when the villain has an unconventional taste in fashion), Nude-Colored Clothes (when a character has the appearance of being naked because they wear clothes the same color as their skin), Accidental Innuendo (when a statement not intended by the creators to be dirty is still interpreted as something lewd by the audience), and Unfortunate Names (a character's name sounds wrong unintentionally). Will often be Nausea Fuel.