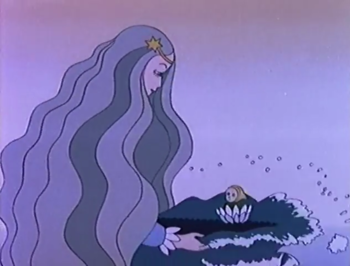 The Blue Flower Of Longing
A Soviet Latvian animation from the 1980s, Fairy Tale Sits on the Doorstep is about a water spirit talking to a child about the changing of the seasons. It won a Latvian National Film Award Lielais Kristaps For Jury's Special Award, and was directed by Roze Stiebra with music composed by Zigmars liepiņš.
Advertisement:

Known as Sed Uz Slieksna Pasacina in its home country of Latvia, it can be viewed on YouTube for free. Here you go.