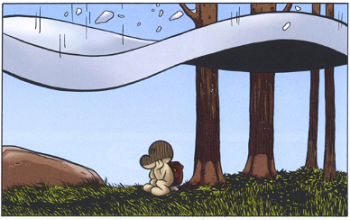 Winter is coming. All at once.
"A year passed. Winter changed into Spring. Spring changed into Summer. Summer changed back into Winter. And Winter gave Spring and Summer a miss and went straight on into Autumn."
— Monty Python and the Holy Grail
Advertisement:

This is a trope where rather than have the normal Spring, Summer, Fall, Winter progression in a nice predictable order, the setting has seasons that are weird. It may have extra seasons, or seasons with strange weather, or perhaps the seasons change randomly.

Note this is for works that have this as an explicit part of the setting, it doesn't count if it's just the result of writers and producers either being bad at keeping track of what season it's supposed to be, assuming It's Always Spring unless the weather is plot-relevant, or just not giving a darn. It also doesn't count if the craziness was imposed by a deliberate magical spell or other similar effect, unless it happened so long ago that the characters don't think anything of it.

Not to be mistaken for a Bizarro Episode that lasts an entire season.