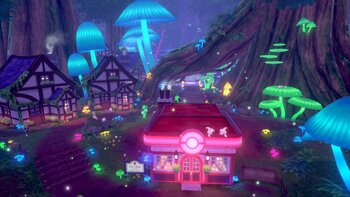 Flowers and plants are already beautiful by themselves in Real Life, but some creators don't think this is quite enough. And what better way to make them even more alluring that making them glow?

Contrary to animals, for which bioluminescence is Truth in Television for some species, plants almost never display such feature in Real Life — plants gain all of their energy by absorbing light, so sending that light right back out would achieve nothing beyond wasting it. They don't need to glow to attract prey or to see in the dark, so it would be pointless to use energy on bioluminescence.

Glowing fungi also count as this trope, since fiction almost constantly puts the plants and the fungi in the same basket despite them being completely unrelated. Unlike plants, however, there actually are glowing fungi, although most of them aren't as spectacular as the fictional ones.

A Sub-Trope to Bioluminescence Is Cool. Sister Trope to Lighting Bug, where fauna glows instead of flora.