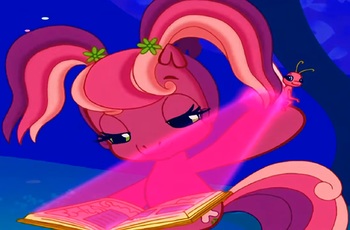 Pony reading at night, by the firefly light...
Your Treehouse of Fun doesn't have any wiring installed, so you'll need something else to light things up. Lanterns are a dangerous alternative for your Arboreal Abode, so we can't use any old candle...
Advertisement:

How about we just shove some fireflies into a jar?

Maybe a Nature Spirit is more comfortable with a paper lantern of glowing bugs than a wrought iron lamp burning some oil. Or maybe some Beetle Maniac thinks that Biotech Is Better. Whatever reason for it, the idea of using lightning bugs or glowworms to see feels closer to nature than a burning wick of wax. Sometimes, it's a result of nature itself and not someone's Bug Catching: perhaps a grove will light up when a swarm of shimmering butterflies resting on the walls rustle their wings.

There's some Truth in Television, but only as a fun activity for little kids, as they're tiny, short-lived bugs that only glow at a certain time of day during a select period of the year; you'll need to constantly resupply the jar with food for the bugs (and in some species, the adults don't eat at all); it will take dozens of them to make a feasible light source.

A Sub-Trope of Fantastic Light Source and Bioluminescence Is Cool. A Sister Trope to Glowing Flora, where a plant is used for lighting. Overlaps with Bamboo Technology and Bug Catching, and rarely with Fairy in a Bottle.