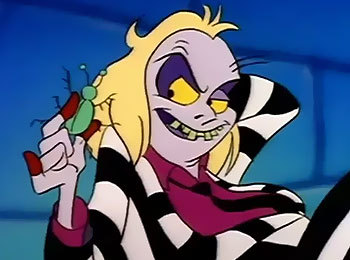 "There is a story, possibly apocryphal, of the distinguished British biologist, J. B. S. Haldane, who found himself in the company of a group of theologians. On being asked what one could conclude as to the nature of the Creator from a study of his creation, Haldane is said to have answered, 'An inordinate fondness for beetles.'"
— G. E. Hutchinson, President, American Society of Naturalists, in a speech to the Society's annual meeting
Advertisement:

Characters who have a great curiosity and interest in beetles that they wanna hold it in their hand and love, love them do. Very common in anime, so let it be.

The interest may spawn either from a fascination of bugs since childhood, or that said character was raised throughout so by them. For when the character shares the same species as the bugs, see Mouse World.

Not to be confused with fans of the legendary British band.