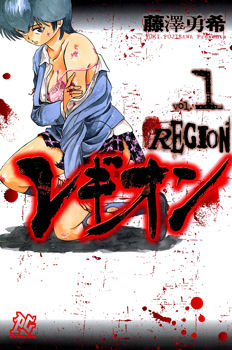 Region is a horror manga by Fujisawa Yuki, the author of Bio-Meat: Nectar. It began its run in 2007, and was serialized in the magazine Play Comic.

Something strange is going on in Tokyo. Despite it being February, it hasn't snowed once this year, and insects are dying off at an alarming rate. While politicians and scientists debate about the effects of global warming, the populace remains completely oblivious to and unprepared for what is coming next.

Chief Togakushi, a widowed engineer who works for a regional power company, is called upon to inspect a newly installed wind farm that is about to go into operation. Along with his lovestruck coworker Asagiri and a guide from the prefecture government, Togakushi notices that none of the equipment on site is receiving power from the basement generators. When the group heads below to investigate, they are stunned by what they find: the basement is teeming with hundreds of thousands of starving rats who have been chewing through the electrical cables. And, as their unfortunate guide soon learns the hard way, the swarm is quick to turn its attention to the new source of food that has just stumbled upon it.

As Togakushi and Asagiri rush to find a way to contact headquarters after discovering that their cell phones are mysteriously not working, the widower's panicked thoughts turn to his high school aged daughter, Kanon, and bug-obsessed younger son, Ryuuto, when he looks into the horizon and realized that there are no lights coming from the direction of Tokyo.

His fears are well founded, as the swarm he encountered is nothing compared to the ravenous plague of rats that is descending on the city. As the Togakushi family rush to find each other before night falls and they are left with no place to hide, scattered emergency radio reports indicate that the entire country of Japan may be under siege.

Tropes present in Region include: