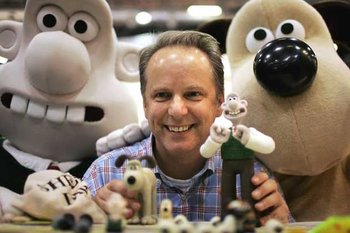 Playing with dolls and winning Oscars since 1990.
Advertisement:

Nicolas Wulston Park CBE (born 6 December 1958) is a British stop-motion animator and director, best known as the creator of Wallace & Gromit and his various other works through Aardman Animations.

Park was born and raised in Preston, Lancashire and began making Super 8 films when he was six, making Stop Motion Animation with clay and paper cutouts when it was obvious that the necessary tools for cel animation were too expensive. He attended The National Film and Television School in Beaconsfield in the early '80s, but ran out of time and money to complete his thesis film. (He was however an animator on Alison Snowden's Oscar-nominated short Second Class Mail.

Aardman Animations hired him right out of school and helped Park finish his film while he worked on other projects, most notably the "Penny" cartoons for Pee-wee's Playhouse and Peter Gabriel's music video for "Sledgehammer", where he animated two dancing plucked chickens.

Park's thesis film, A Grand Day Out was eventually completed in 1989 and aired as a special on BBC to excellent critical and audience reception. Ever ambitious, he had managed to create a second short film, Creature Comforts, while completing his first. And if that weren't impressive enough, both were nominated for the 1990 Academy Award for "Best Animated Shorts" (Creature Comforts won). Park has since had a respectable career, including further installments of Wallace and Gromit and Creature Comforts.

In 2000, he had the honor of co-directing Aardman's feature debut, Chicken Run, with the studio's co-founder Peter Lord.

Tropes applying to Nick Park and his work