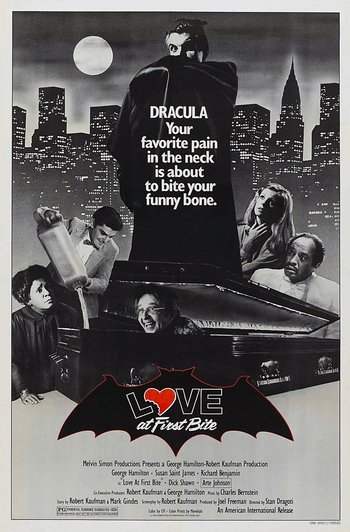 No, that's not a Batman logo.
"I never drink wine, and I do not smoke shit."
— Count Dracula
Advertisement:

Decades before anyone even conceived of the first sparkly vampire, we had a Disco Dracula in this 1979 comedy film directed by Stan Dragoti and starring George Hamilton as the tannest Count Dracula ever to appear on film.

In the (1979 version of) Present Day, the world-weary Count is evicted from his ancestral home by the Communist Romanian government and, along with his bug-eating assistant Renfield (Arte Johnson), travels to New York City in search of his soulmate, currently reincarnated as flaky fashion model Cindy Sondheim (Susan Saint James). In winning her heart, Drac must deal with bumbling assassination attempts from her long-suffering psychiatrist/quasi-boyfriend Jeffery Rosenberg (Richard Benjamin), who is "Fritz" Van Helsing's grandson. Assisting Rosenberg is skeptical NYPD detective Lt. Ferguson (Dick Shawn).

Much, much better than it probably sounds, this film provided the role of a lifetime for Hamilton, and the rest of the cast turned in excellent performances as well.

Hamilton has tried to get a sequel made on numerous occasions, but the concept remains deep in Development Hell.