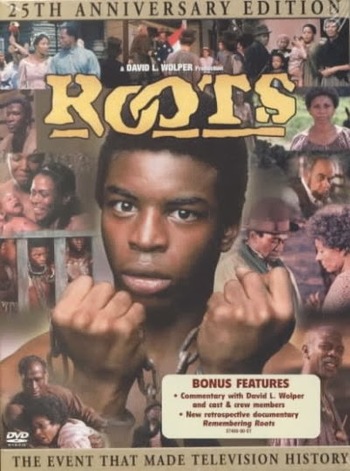 "Kunta Kinte, behold the only thing greater than yourself!"
— Omoro Kinte
Advertisement:

Roots was a TV Mini Series based on the eponymous novel about the family line of its author, Alex Haley, and their struggles coping with slavery from the time of his ancestor Kunta Kinte's enslavement to his Civil War descendants' liberation.

First broadcast on ABC in January 1977, the series was a tremendous success, prompting new public interest in genealogy and, in regard to television, established the Mini Series as a high profile prestige format for prime time.

The first Roots, the generally better received one, went only up through Reconstruction after The American Civil War, while a 1979 Sequel, Roots: The Next Generations, picked up in 1882 and went through to Alex Haley himself, culminating in his visiting Kunte Kinte's home village in 1967.

LeVar Burton helped produce a remake of the first series in 2016, which apparently had new facts that had come up about Kunta Kinte's life since the first one was made (they included his growing up in a city rather than a village and that he knew several languages, including a smattering of English).