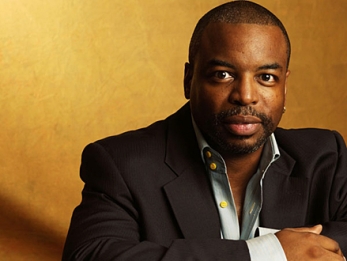 Lance Reddick wishes he was this guy.
"As long as we are engaged in storytelling that moves the culture forward, it doesn't matter what format it is."
Advertisement:

Levardis Robert Martyn Burton Jr. (born February 16, 1957) is an American actor famous for starring as Starfleet engineer Geordi La Forge on Star Trek: The Next Generation and its subsequent films.

He first became famous for his Star-Making Role as the young Kunta Kinte in the 1977 miniseries Roots, based on the novel by Alex Haley, before he went on to host the children's educational show Reading Rainbow from 1983 to 2009note the last new episode was made in 2006 (which has been brought back in the form of an iOS app in 2012; thanks to a successful Kickstarter campaign

during the summer of 2014, it's been revived as a web resource and school supplement).

However, then the TV station that previously produced Reading Rainbow came and sued LeVar

, claiming that they themselves are working on a revival of the series, and that LeVar was mistaken — that they didn't sell the entire franchise to him lock, stock and barrel, but just licensed it to him. While LeVar lost the lawsuit, the worst that happened was that his project was just rebranded. In the meantime, time will tell if WNED's action would result in backlash against the relaunched show (like what happened after the producers of The Lone Ranger remake in The '80s tried to pull trademark violation on Clayton Moore), when and if it happens — one thing that is clear, though: the so-called retool is stuck in Development Hell as of 2019.

Burton also launched the podcast "LeVar Burton Reads" in 2018, which is... Exactly What It Says on the Tin. In each episode, he reads a piece of short fiction accompanied by sound effects and music. The podcast has fairly been called "Reading Rainbow for adults", although WNED got tacky about him describing it that way himself, as well as for using his Catch Phrases "you don't have to take my word for it" and "I'll see you next time." (The settlement for the lawsuit allowed him to keep saying them on the podcast.) Typically, the stories featured are some form of Speculative Fiction, whether it's fantasy, scifi, or fantastic realism, but other genres are sprinkled in too, and range in tone from heartbreaking to hilarious.

He's also a well-respected TV director, having started out on The Next Generation before moving onto Deep Space Nine, Voyager, Enterprise, and episodes of non-Trek series like Charmed, JAG and Las Vegas, as well as the 1999 Disney Channel Original Movie Smart House. He also has done some voice acting, of which includes his role as Kwame in Captain Planet and the Planeteers. He is also now producing a remake of Roots using new historical information about Kunta Kinte's life.

He lent his voice to Transformers: Rescue Bots as Doc Greene and Miles from Tomorrowland as Dr. Consilium. He's also dabbled in writing with the racial thriller Aftermath and the childrens book The Rhino Who Swallowed a Storm.

After Alex Trebek passed away in 2020, there was a concerted fan campaign to have him become the new host of Jeopardy! in 2021. While Burton did guest host, he did not get the job. He had previously competed on "Celebrity Jeopardy!" in 1995, winning $14,500 for the Somalia Foundation. The enthusiasm for Burton as a game show host did not go unnoticed, however, and it was later announced Burton would host a TV iteration of Trivial Pursuit.

He has two children, Ian and Michaela 'Mica' Burton, the latter of whom worked for Rooster Teeth Productions for a time, now better known for her association with Critical Role.

You may know him from Reading Rainbow or Star Trek (or Roots).

You may know him from Reading Rainbow or Star Trek (or Roots).