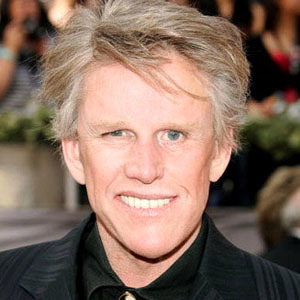 Gary Busey: [to his reflection] HOW AM I DOING TODAY GARY BUSEY?
Gary Busey's Monster Reflection: YOU'RE DOING GREAT!
Gary Busey: GOOD! THEN I'LL KEEP IT UP!
— Family Guy
Advertisement:

Originally from Texas, Busey began his career in 1968 and his popularity sky-rocketed with The Buddy Holly Story. From there, Busey had acclaimed and memorable roles such as Thunderbolt and Lightfoot and Lethal Weapon. He is one of the most prolific actors in Hollywood with over 150 movie roles under his belt, which doesn't even include his television and a handful of video game roles.

A motorcycle enthusiast, Busey was famous for not wearing a helmet. That would all change on December 4, 1988, when he got into a motorcycle accident and seriously damaged his skull in the process. Busey spent several months in physical therapy regaining control of his entire body, and he suffered brain damage that "weakened his mental filters." The extent of the damage wasn't fully realized until two decades later, and the general view of him now is that he's absolutely crazy. It's a fair assessment; interviews with him and anecdotes from people who have met him paint the picture of an erratic and, at times, unsettling personality. Thankfully, he's taken this in stride and even embraced the image somewhat.

Busey has something of a cult following due to his hammy performances. He also battled with drug abuse and in 1995, he had a cocaine overdose and never did drugs again. He's also the father of Jake Busey.

Tropes relating to the actor: