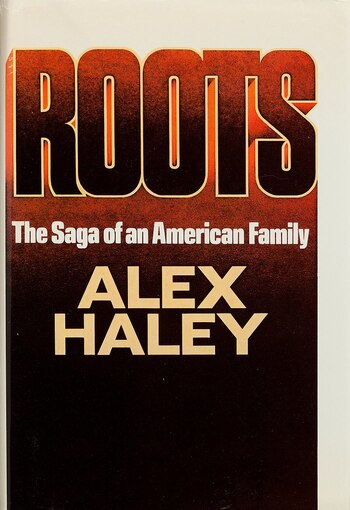 The book that started it all.
"...[J]oin me in the hope that this story of our people can help alleviate the legacies of the fact that preponderantly the histories have been written by the winners."
Advertisement:

Roots: The Saga of an American Family is a Pulitzer Prize-winning historical novel written by Alex Haley and published in 1976. It describes, with varying degrees of accuracy, the tragedies and triumphs of Haley's known direct ancestors, highlighting each one of them in turn within the narrative.

It starts with the birth of Kunta Kinte, a typical boy from the village of Juffure in the Gambia, who, after manhood training, grew up to become a reasonably successful farmer and trader. Around age 17, after his night watch duties, he wandered into the nearby forest to chop some wood to make a drum for one of his brothers. There, he was attacked and captured by four slave traders who hauled him away.

From there, it follows Kunta's life for many years, being owned first by the cruel John Waller, who renamed Kunta to Toby (though Kunta would never recognize the name as his), then sold to John's brother the kinder (but still staunch slaver) William Waller, and from there to his marriage to the house cook Bell and the birth of his daughter Kizzy. The narrative then flows to follow both Kunta and Kizzy, taking special care to note that Kunta would tell Kizzy stories about his life in Africa whenever the opportunity arose, and taught her some words in his native Mandinka language. The story follows them both until Kizzy is sold away from her parents to a plantation in another state, after which the narrative then follows her alone until the birth of her own child, George, who was born as a result of frequent raping by her new master Tom Lea.

The book gradually shifts away from Kizzy's life as a slave cook to a high focus on George, but not before noting that she took special care to pass all the stories and Mandinka words she learned from her father to her son, so that he might know who his proud African grandfather was.

As George grew he became the right-hand slave to the master, who was an avid gamecock farmer and fighter. George's natural skill at raising and training gamecocks earned him the nickname "Chicken George," a tag he wore with pride for the rest of his days. While detailing Chicken George's life, the book notes that he ultimately had eight children through his wife Matilda. After each birth, he rounded up his entire extended family and told them all the stories and Mandinka words he had learned from Kizzy through their great-grandfather, the African Kunta Kinte.

One of Chicken George's boys, Tom, was a little different than the rest of the children. He was quiet, reserved, and thoughtful, very much unlike his boisterous and gregarious father or his sullen and cranky brothers. He turned out to have a natural talent for blacksmithing, and after gaining freedom from the end of the Civil War and the whole family moving to Tennessee, he became a very successful traveling smith. He ultimately had seven children of his own, and like his father before him, at each birth he brought in the entire extended family to retell all the stories and Mandinka words of their African great-great grandfather Kunta Kinte.

Tom's youngest daughter, Cynthia, grew up as thoughtful and intelligent as her father, and married a man named Will Palmer, who became a successful lumber yard owner — the first black man to run such a large business in Tennessee. They had one daughter, Bertha. Cynthia made it a point to stay in touch with her extended family and periodically gather them to her home, where she continued the family tradition of telling everybody, including Bertha, the family legend of their African ancestor and all his wonderful stories and strange Mandinka words.

Bertha went to college, where she met and married a struggling young man named Simon Haley. They had three sons before Bertha's death at a young age.

The eldest of their sons, Alex, grew especially close to his grandmother Cynthia, and loved sitting on her porch and listening to all the old stories Cynthia and her kin would tell about their African ancestor: the man who had been stolen away by four men while chopping wood to make a drum for his brother, and had gone by boat to a place called "Naplis" where he was sold to a man named John Waller, who named him Toby, but he would only answer to his birth name of Kinte. And how this Kinte tried four times to escape, but was recaptured and got his foot cut off, and then was sold to John Waller's brother William, and that on William Waller's plantation he married the cook Bell and they had a daughter named Kizzy whom he taught his history and many Mandinka words, but was sold away and then had a son Chicken George who was a famous gamecock trainer and fighter, and then Chicken George had a son, Tom the Blacksmith, who had Cynthia.

The book concludes with Alex Haley describing the research he did to verify independently as much of his family's story as he could, claiming that through written records and oral history from the region he identified as the likeliest place of Kinte's birth he was able to piece together enough of the story to know the tales had to be at least mostly true — that a Mandinka named Kunta Kinte had disappeared without a trace, that a slave ship called the Lord Ligonier had traveled from that land to Annapolis, Maryland at the time Kunta would have been around 17, and that a John Waller had sold land and a slave named Toby to his brother William. He also found a census form with Tom Murray, blacksmith, on it — Cynthia's father — from the town in Tennessee where Chicken George was said to have taken the entire family after Emancipation.

Haley then wrote the book, filling in from his imagination all the parts that couldn't be verified (primarily conversation and some filler events), but noting that, to the best of his knowledge and study, the lineage information was accurate. His stated goal was for the book to be a kind of analogue for all American blacks who had lost their family histories through the brutality and dehumanization of slavery. He knew he was incredibly lucky that any shred of his African heritage had survived the systemic suppression of the Slave Codes and of families being torn apart by sale, and that most black Americans have no way to tell such a story.