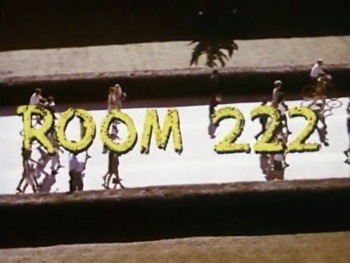 A comedy-drama series created by James L. Brooks and airing on ABC from 1969 to 1974, focusing on life at a typical American High School in Los Angeles and in particular the American history class taught inside the eponymous Room 222 by idealistic African-American teacher Pete Dixon (Lloyd Haynes).

Many serious topics facing teenagers were addressed, some relevant today: bullying, depression, suicide, teen pregnancy, drug and alcohol abuse, violence, cheating, teacher-student relationships and so forth. Despite this, most episodes had at least one lighter-hearted subplot to provide balance.

In addition to being the first major success for Brooks (who would go on to develop many popular TV shows and films), and one of the first successful series set at a high school to appeal directly to teenagers, Room 222 is best remembered today for two things: