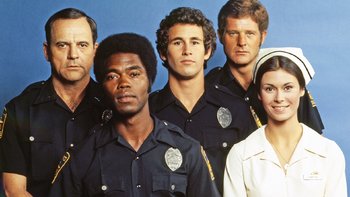 The Rookies is a Crime and Punishment Series that aired on ABC from 1972 to 1976. It was the first production from Spelling-Goldberg productions, and was produced by Aaron Spelling and Leonard Goldbergnote Goldberg had previously been a censor at ABC, where he met Spelling and cut him some breaks with regard to content on Burke's Law, which Spelling was producing for Four Star Television at that time. He then became an executive for Screen Gems before joining up with Spelling. and created by William Blinn.

When the series went into production, Jared, Kevin and Molly were nowhere to be found. Brown, Melville and Ontkean reprised their roles from the movie, but Jill Danko went from being played by blonde Jennifer Billingsley to brunette Kate Jackson. Additionally, their supervisor was now Lt. Ryker and was being played by Gerald S. O'Loughlin.

The series could be described as a cross between The Mod Squad (another Spelling-produced series, which was on its last legs at the time) and Adam-12. The men were young idealists like the trio in Mod Squad and also young uniformed cops. Unlike Captain Greer on Mod Squad, Ryker was hardly a benevolent father figure, but a stern taskmaster trying his best to forge his charges into serviceable officers. He felt that trying to handle dangerous situations peacefully, which the guys were always trying to do, could result in dead cops, or worse, dead civilians. He realized that no officer likes to pull their guns out, but at times, it's a necessity.

This being an Aaron Spelling series, there were an awful lot of 'personal episodes', in addition to the crime solving (Willie facing possible paralysis, Terry facing the possibility of blindness, pregnant Jill being shot by a sniper and losing the baby, even Ryker struggling with the possibility that a kidnapped girl they're searching for just might be the daughter he gave up for adoption years before).

Off-camera, the actors looked at the show somewhat differently. Georg Stanford Brown wondered if he was properly portraying a cop...was he doing his best to portray a police officer in a positive light? Conversely, Michael Ontkean was only concerned with what the series could do for his acting career. The disgruntled actor left the series (and acting, temporarily) at the end of the second season.

The series ended in 1976, just in time for Kate Jackson to land her Star-Making Role as Sabrina Duncan in Charlie's Angels. Georg Stanford Brown, who directed a few Rookies episodes, decided to continue in that path for the next decade, working as a busy TV director before returning to acting.

Do not confuse this with the 2019 spy parody film with the same title.

You men, go out and find these tropes! NOW!