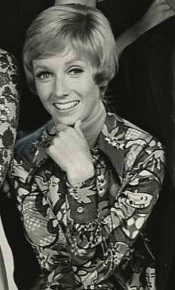 Sandra Kay Duncan (born February 20, 1946 in Henderson, Texas) is an American comic actress from Henderson, Texas. She is well known for her sitcoms, her TV commercials and her guest appearance on The New Scooby-Doo Movies.

As she was an untried talent on the primetime scene, CBS decided that Duncan had enough promise and star quality to be given her own TV sitcom. Replacing Melba Moore at the last minute in the weekly show Funny Face (1971), Duncan played single, independently minded Sandy Stockton, a corn-fed Midwesterner who heads to the big city, Los Angeles, where she winds up in TV commercials while pursuing a teaching degree at UCLA. The series was a success and was a Top 10 show, but Duncan began experiencing severe headaches on the set and a tumor was discovered on her optic nerve. She had to leave the series and it was consequently pulled from the air. The series' sudden departure led to a misconception among some viewers that it had been canceled. After a lengthy and delicate operation, the doctors managed to save her left eye but she lost all vision in it. Despite rumors, she does not have a glass eye, though the incident did inspire a punk/alternative rock band called Sandy Duncan's Eye.

In 1972, the show was revamped and retitled. Duncan returned as Sandy Stockton, now a single working girl who created chaos at an ad agency. This second incarnation of her series failed to regain the audience that Funny Face had had. The Sandy Duncan Show (1972) was canceled by mid-December. In the meantime, she divorced her first husband, Bruce Scott. In 1973, she married Dr. Thomas Calcateera, whom she met while undergoing her eye operation. They would divorce six years later. Duncan and her third husband, Don Correla, live on New York's Upper East Side.

In the late 1980s, Duncan took over Valerie Harper's sitcom on NBC, which by that time became known as The Hogan Family.