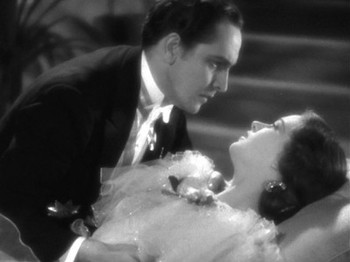 When Death is this sexy, you can't say no.
Advertisement:

Death Takes a Holiday is a 1934 American romantic fantasy-drama film based on a 1929 play of the same name, itself adapted from the 1924 Italian play La Morte in Vacanza ("Death on Vacation"). The film was directed by Mitchell Leisen, as his second directorial effort for Paramount.

Death (Fredric March) has decided to take a three-day holiday to visit the mortal world and discover just why humans fear him so. He forces Duke Lambert (Guy Standing) to put him up at his Italian estate. Taking the form of a recently-deceased nobleman, Prince Sirki, Death enjoys the various pleasures of the Idle Rich such as horse racing, boating, gambling, and being courted by lovely women.

A side effect of this little holiday is that no one in the world has been able to die, even if they, by all odds, should have.

Everyone in the Lambert party is very taken by this handsome and odd fellow: Rhoda (Gail Patrick) and Alda (Katherine Alexander) vie for his love, Baron Cesarea (Henry Travers) is interested by his musings about life and love, and another pleasure arrives in the form of Grazia (Evelyn Venable), who Death falls for, and she for him.

In the span of a few hours, Death feels The Power of Love, but when Alda finds out his identity and reveals his secret, he knows that he must leave Grazia behind— or so he thinks.