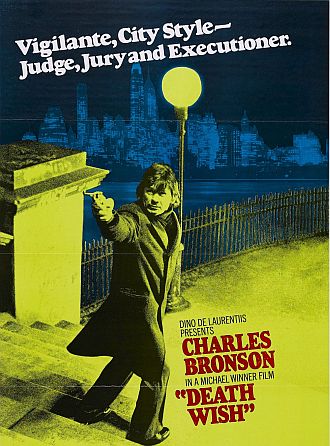 He wants the filth off the streets. If the police can't do it, he will... his way.
"People like the idea of revenge. You ever hear the expression, 'The best revenge is living well'? It means supposedly the best way to get back at someone is just by being happy and successful in your own life. Sounds nice. Doesn't really work on that Charles Bronson-kinda level, you know what I mean? Those movies where his whole family just gets wiped out by some street scum. You think you could go up to him, 'Charlie, forget about the .357. What you need is a custom-made suit and a convertible. New carpeting, French doors, a divan! That'll show those punks!'"
— Jerry Seinfeld
Advertisement:

A 1974 action-neo-noir-crime-drama film based on the 1972 novel by Brian Garfield (who also wrote Death Sentence). The film was directed by Michael Winner and stars Charles Bronson (the actor, not the prisoner).

New York City architect Paul Kersey has his world shattered forever when his apartment is invaded by three vicious punks, who murder his wife and rape his daughter. After being sent to Arizona by his boss to meet with a client, Kersey has his old interest in guns rekindled and eventually one gets slipped into his bag by the client as he's preparing to return to New York. Upon his return, Kersey starts dispensing vigilante justice to the scum on the streets, shooting down any mugger who tries to rob him. The police want him arrested, but the public are behind him, glad that someone's doing something to clean up the streets. Kersey is eventually forced to leave the city to avoid prosecution, much like the Old West vigilantes of long ago.

The film was a major commercial success and generated a movie franchise lasting four sequels over a twenty-year period. Denounced by critics (and by Garfield — see Creator Backlash in Trivia) for its advocacy of vigilantism and unlimited punishment to criminals, Death Wish was nonetheless seen as speaking to a growing mood in the United States as crime rose during the 1970s.

A remake of this film (and just this one, it is unrelated to the rest of the pentalogy) premiered on March 2018, moving the action to Chicago and now starring Bruce Willis under the direction of Eli Roth.

For a character with a death wish, see Death Seeker.