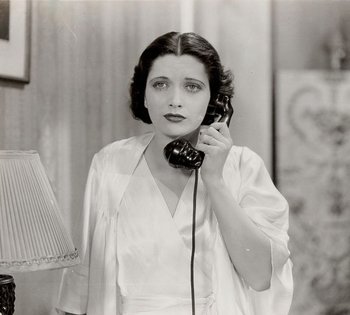 Not only does your husband cheat on you, but you have to deliver his baby, too!
Dr. Monica (1934) is a pre-code era drama starring Kay Francis, Warren William, and Jean Muir, and was directed by William Keighley.
Advertisement:

Dr. Monica Braden (Francis) is almost the happiest woman in the world. Although she’s a respected obstetrician and is married to writer John (William), she wants to baby badly and can’t have one.

Busy with her work, she sends her husband off on a vacation to write in Europe, and at the same time, she finds that her friend Mary (Muir) is acting rather strangely. Monica discovers that Mary is pregnant and is going to be an unwed mother. Monica is happy for Mary while Mary shows a serious hesitance to having the baby. Monica convinces Mary to go ahead with the pregnancy and on the day the baby is to be delivered, Monica makes a heartbreaking discovery: Mary’s baby is also her husband’s.

Although this film was made in the pre-code era, the film was still heavily censored for dealing with topics of unwed mothers and adultery.