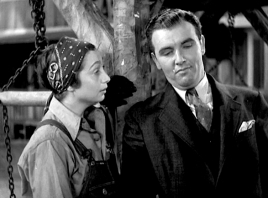 The Wrench Wench tries to fight off the Bad Boy.
Heat Lightning (1934) is a pre-Code drama directed by Mervyn LeRoy. This film has the distinction of being one of the last films to slip by before The Hays Code crackdown and has some very feminist overtones.
Advertisement:

The film follows a day in the life of two sisters, Olga (Aline MacMahon) and Myra (Ann Dvorak). Both work in an auto camp in the middle of the Californian desert. Olga is the older sister who has no problem getting down and dirty with “men’s” work —fixing up cars, being self-reliant, not wearing any dresses—and has seen enough of the world to know that it's not all that it’s cracked up to be. Myra, on the other hand, is young and naïve and dying to be somewhere exciting.

As the desert day gets hotter, two men on the lam from a robbery come in called Gerry (Preston Foster) and Jeff (Lyle Talbott). It turns out Gerry and Olga have a shared past: Olga was a cabaret dancer in Tulsa, and Gerry was her abusive boyfriend. Another trio of characters come in to the picture: wealthy divorcees, Mrs. Tifton (Glenda Farrell) and Mrs. Ashton-Ashley (Ruth Donnelly), and their chauffeur, Frank (Frank McHugh). Throughout the day, Gerry and Olga have some sexual tension while he plans to steal from the wealthy women. Meanwhile, Myra wants to sneak out on a date with a man her sister disapproves of, and the divorcees have some wacky hijinks with their chauffeur. But at the end of the night, both sisters are disappointed with their choice in men.

See The Petrified Forest for a similar setting.