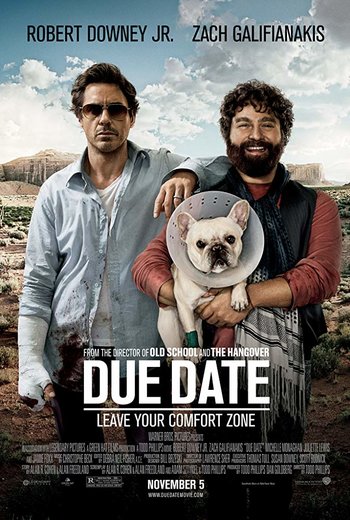 Due Date is the heartwarming story of two guys with vastly differing personalities traveling together on a mishap-laden journey that will, in the end, help them both to learn more about themselves.

Due Date, starring Robert Downey Jr. and Zach Galifianakis, is a 2010 comedy about two men trying to get to Hollywo... er, Los Angeles. Peter Highman (Downey) is a rather ill-tempered man, because his wife Sarah (Michelle Monaghan) is about to give birth and he is trying to get back to Los Angeles in time for it and figure out what to name his soon-coming child. He meets Ethan Tremblay (Galifianakis) and soon gets almost arrested twice, shot by a rubber bullet and put on a No-Fly list due to using the words "bomb" and "terrorist," all thanks to being near Ethan. To make up for it, Ethan gives Peter a lift because he is going to Hollywood to become an actor. Ethan also has an interview around the same time as Peter's wife's delivery. Making the trip more difficult is the fact that Ethan seems to have never grown up and wanting to go to the Grand Canyon, Peter's inability to relax and the fact that Ethan seems unable to rub two brain cells together.

Will they make it in time?