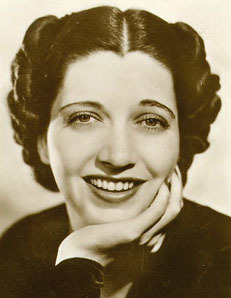 "My life? Well, I get up at a quarter to six in the morning if I'm going to wear an evening dress on camera. That sentence sounds a little ga-ga, doesn't it? But never mind, that's my life [...] As long as they pay me my salary, they can give me a broom and I'll sweep the stage. I don't give a damn. I want the money. [...] When I die, I want to be cremated so that no sign of my existence is left on this earth. I can't wait to be forgotten."
— From one of Kay's diary entries, c. 1938

Kay Francis, born as Katherine Edwina Gibbs (January 13, 1905 — August 26, 1968) was an American actress that appeared in many films during The Pre-Code Era and The Golden Age of Hollywood. She was signed to Warner Bros. and was the highest-paid actresses of the studio in 1935, as well as one of the tallest in Hollywood at 5'9.

Francis began her acting career in Broadway, following in her actress mother's footsteps, where she was discovered by Paramount, and then moved to Hollywood when the film studio relocated. The first film she appeared in was the Marx Brothers movie The Cocoanuts in 1929 and was soon persuaded by Warner Brothers to sign with them for bigger roles.

After the studio change, Kay portrayed a variety of characters from heroic to villainous. She soon became an audience favourite and appeared on the front cover of several gossip magazines. It was discovered that she suffered from Elmer Fudd Syndrome, which gave her the nickname "Wavishing Kay Fwancis", adding to her Ms. Fanservice appeal.

In the mid-1930s, Francis was nicknamed "The Queen of Warner Bros" and was the highest-paid actress, but in 1938, she was soon labelled "Box Office Poison" along with Katharine Hepburn, Joan Crawford and Fred Astaire, making Warner Bros drop her contract. However, Carole Lombard encouraged her to make an appearance alongside her and Cary Grant in the 1939 movie In Name Only, and Francis soon became a household name again.

Francis' film career fizzled out after the breakout of World War II. She struggled to find acting work and a few films that she eventually appeared in had very limited releases (mostly because audiences weren't focused on cinema at the time), so she returned to the stage, but she soon retired after a radiator accident in 1948 gave her body severe burns.

Francis continued acting in B-movies until retiring in 1952, and died from breast cancer at 63 years old, having appeared in over 70 movies between the 1920s and '50s. In her will, she donated $1 million to a guide dog charity because she had no living family members or children, and her body was cremated. She never published an autobiography, but her diaries were discovered and are held in Wesleyan University. She also married five times (some of the marriages have missing time frames) and was known by some for being a Fag Hag, befriending and socialising with several homosexual men.