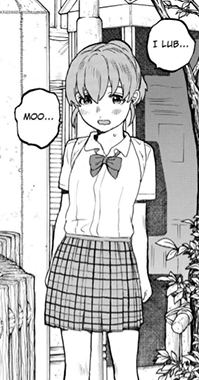 Awww...we lub moo too.
"Her struggle with the "R" enunciation gets laughs yet, but then and now it served as endearing equalizer for a woman who'd have seemed too perfect otherwise."
— A movie reviewer

Imagine yourself meeting a gorgeous girl that seems to have come from the pages of a romance novel. She seems perfect in every way... That is, until she opens her beautiful mouth. Once she does, you realize that she either has pwofound twouble with her w's, s-st-tutters, lithpth or cannot speak clearly at all. Basically, you have a downplayed version of Disabled Love Interest.

When the speech impediment is shown to be debilitating (like a severe stutter), it is usually given to a fragile Shrinking Violet who is waiting for her knight in shining armor. Often, though not always, she recovers from the impediment by the end of the story; in this case, that's part of the Adrenaline Makeover with possible Unfortunate Implications because it makes out that a hero wouldn't want a disabled or otherwise "imperfect" love. At other times, though, the impediment serves as an endearing quirk which only adds to the character's charm (it may even be lampshaded in-story). In some cases, the Love Interest may even be unwilling to undergo speech therapy for exactly this reason.

Compare with Cute Mute. An inversion of this trope is a speech-impeded protagonist.