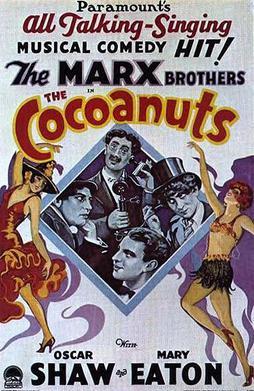 The One With… the Florida land boom and the viaduct. Why a duck? We don't know, really.

The Cocoanuts is a 1929 musical comedy that starred the four Marx Brothers, Groucho, Chico, Harpo, and Zeppo. Originally this was a stage musical written by Irving Berlin and George S. Kaufman for the Marx Brothers in 1925. Later this was adapted to the screen in 1929 by Paramount Studios and filmed in their Astoria, Queens, location. This is technically the Marx Brother's screen debut, as their previous attempt, a silent film entitled Humor Risk, was effectively destroyed after one viewing.

The plot involves the manager of the Hotel de Cocoanut, Mr. Hammer (Groucho), who runs a resort hotel located in Florida and his assistant Jamison (Zeppo). Chico and Harpo arrive with empty luggage, with the intention of conning and stealing from hotel guests and filling up their loot in the suitcases. Meanwhile, the wealthy Mrs. Potter (Margaret Dumont) arrives with her daughter Polly, who is in love with Bob Adams, a young man who also happens to work at the hotel. But Mrs. Potter wants Polly to marry the seemingly well-to-do Harvey Yates, not knowing he's secretly a con-artist with an equally conniving partner, Penelope. Expect chaos and confusion to run amock as con-artists clash and the usual one-liners and sketches from the Marx Brothers to stop the plot.

The Marx brothers themselves hated the film, and were so disappointed with the final cut that they actually tried to buy the rights to the movie from Paramount in order to prevent it from being released, fearing it would severely hinder their film careers. Fortunately for them, Paramount refused, and the movie became a smash hit.