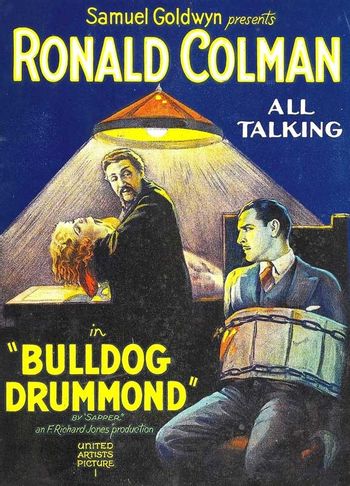 Bulldog Drummond is a 1929 film directed by F. Richard Jones and starring Ronald Colman as Drummond. It is the third film adaptation of the Bulldog Drummond novel series and the first talkie Drummond film.

Hugh "Bulldog" Drummond is a former British Army officer who finds himself at loose ends with nothing to do after World War I. Life as an uppercrust Englishman sitting around in a club is so dull for him that he puts out a newspaper advertisement asking for "excitement" of any sort—"Legitimate, if possible, but crime of humorous description, no objection." He receives various weirdo letters, but is finally intrigued by a message from one Phyllis Travers, who describes herself as being in "hideous danger" and begs for his help. Drummond, imagining her to be "dark, voluptuous, and dramatic", takes off immediately.

He finds that Phyllis (Joan Bennett) is blonde instead of dark, but she's voluptuous and dramatic in spades. Phyllis begs Drummond to help liberate her wealthy uncle, John Travers. Travers is being held in a mysterious asylum, supposedly because he's had a nervous breakdown, but Phyllis believes that he's really being held prisoner by villains after his money. Drummond is about to blow her off as delusional when Travers' menacing, Obviously Evil psychiatrist Dr. Lakington arrives and makes him suspicious. Drummond then sets off to rescue the old man and get the girl in the process.

Bulldog Drummond was the talkie debut for Ronald Colman, who had been a star since he appeared opposite Lillian Gish in The White Sister in 1923. While many silent film stars (Gish, Buster Keaton, John Gilbert, and more) saw their careers torpedoed by sound, the success of this film helped Colman to make a smooth transition, and his career thrived for decades to come.