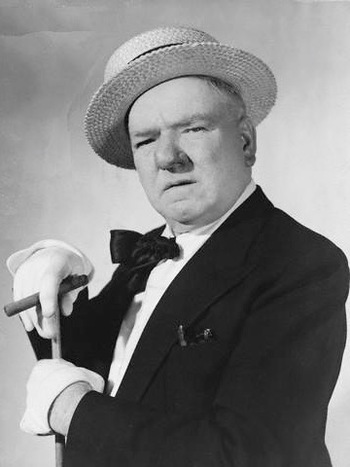 "On the whole, I'd rather be in Philadelphia." † Fields, a native of the City of Brotherly Love, once humorously suggested the quoted phrase as an epitaph for himself.
"Any man who hates dogs and babies can't be all bad."
— Leo Rosten on W. C. Fields
Advertisement:

William Claude Dukenfield, aka W. C. Fields (January 29, 1880 – December 25, 1946), was an American comedian, actor, juggler, and writer, most famous during the 1930s and '40s. He made several classic comedy films, but was also well known for his radio performances with Edgar Bergen's dummy Charlie McCarthy.

Fields is best known for his comic persona as a misanthropic alcoholic who generally disliked dogs, women and children, an image that was a bit Truth in Television. His films have been praised for their clever jokes and anti-sentimental comedy, which made him a cult actor even to this day. John Cleese said Fields was doing Pythonesque things long before Monty Python. And The Bank Dick (1940), in particular, has been Vindicated by History as one of the best comedy films of all time.

Fields is endlessly quotable, being a funny comedian as he is. Not all of it is safe for work though.

Fields spent the last two years of his life in a sanitorium, suffering from failing memory and eyesight, a side effect of his alcoholism. He died on Christmas Day, 1946, from a massive gastric hemorrhage, aged 66.

Fields is also present on the album cover of Sgt. Pepper's Lonely Hearts Club Band by The Beatles.