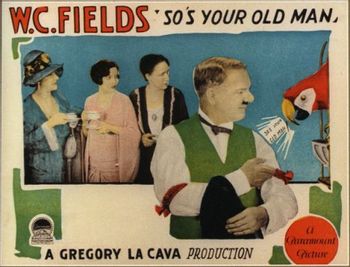 So's Your Old Man is a 1926 comedy feature film directed by Gregory La Cava, and starring W. C. Fields in one of his first major roles.

Fields plays Samuel Brisbee, a husband and father in Waukeagus, NJ. He is also a professional glazier, and has invented a new shatter-proof glass windshield. His daughter is in love with the young scion of the richest family in town, but Sam's uncouth behavior when the young man's mother comes to visit leads her to forbid the marriage. His wife kicks him out of the house over this. His work goes bad too when he massively screws up a demonstration for auto executives and doesn't sell his new windshield. Sam is contemplating suicide on the train back home when he happens to meet a Spanish princess traveling incognito. The princess resolves to help her new friend out.