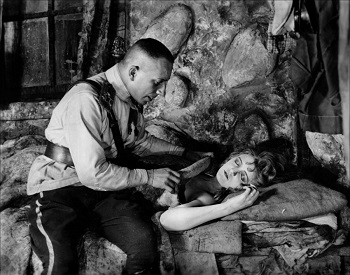 What a creep.
Advertisement:

Foolish Wives is a 1922 film directed by, written by, and starring Erich von Stroheim. Here von Stroheim plays Count Wladislaw Sergius Karamzin, who may or may not be an actual Russian count. He is in Monte Carlo in 1919 along with his two partners in crime, Princess Vera and Princess Olga, who are pretending to be his cousins but are definitely neither his cousins nor Russian princesses. In any event, all three of them are definitely con artists, funding their stay in Monte Carlo by passing off counterfeit banknotes created by Ventucci, another one of their partners in crime.

The count and his partners sense opportunity with the arrival of Andrew Hughes, the new U.S. envoy to the principality of Monaco. The idea is that Count Sergius, who specializes in exploiting lonely and/or frustrated ladies, will seduce Hughes' wife Helen and bleed her of money. The main complicating factor in this scheme is the sensual appetite of Count Sergius, who, besides targeting Helen Hughes, is sleeping with Karamzin maid Maruschka (and exploiting her for money as well) while lusting after Ventucci's daughter Marietta, who is both underage and mentally disabled.

Foolish Wives was von Stroheim's third directorial feature and his first Troubled Production. The film, originally budgeted for $250,000—already an expensive production for The Roaring '20s —eventually checked in at $750,000, according to von Stroheim, or over a million, according to the studio. Whichever was the true sum, it was a hugely expensive production and established von Stroheim as a Prima Donna Director and The Perfectionist, a man who could not work within the studio structure. At one point Universal tried to fire him, but they couldn't, because von Stroheim was the star as well as the director. Production didn't stop until Universal literally took von Stroheim's cameras and crew away. Von Stroheim then submitted an eight-hour cut of the film to Universal and refused to make any more cuts, so the studio did it for him (the version that survives is cobbled together from several sources and runs about 2:20). Studio clashes like the one around this film ended von Stroheim's directorial career by the end of the decade, although he worked as an actor for many years after that.